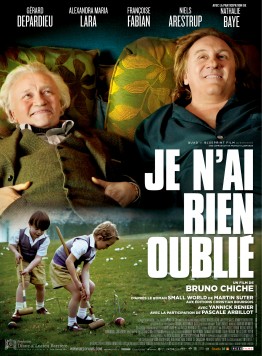 Sixty year-old Conrad Lang has Alzheimer’s. Though he’s losing his short-term memory, memories from his past keep on coming to him. These memories bring him back in time to when he was a young boy. This involuntary investigation in the depths of his mind threatens to let out a dark family secret, of which Conrad was the first victim.

For years Conrad Lang (Gérard DEPARDIEU) has been living off the Senn family; at first a childhood playmate of Thomas (Niels ARESTRUP), later caretaker for the family’s summer home in Biarritz. The family used him as they felt fit and Conrad seemed content with the arrangement.But as his health slowly worsens, a strange friendship grows between him and Simone (Alexandra Maria LARA), the young wife of the family heir, as she listens to Conrad’s memories from his early childhood and notices that they somehow don’t quite stick to the family version. Conrad’s stories provoke such anguish in Elvira (Françoise FABIAN), the family’s matriarch, as if this harmless old fool somehow had the means of destroying her.
Their friendship will soon lead Simone to stand up for Conrad and front an eerie Elvira, who could be far more dangerous than she appears.